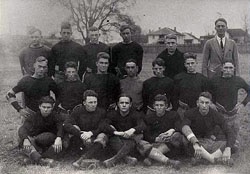 Ten years after the arrival of the first Georgia, Carolina and North Railroad Passenger Train, Jug Tavern was again renamed to the City of Winder.

Local officials approved the name change in 1893, and the change became official by an Act passed by the Georgia General Assembly on December 24, 1894. Named for the general manager of the Seaboard Railway, John H. Winder, the city's boundary was enlarged to encompass a one-mile circle extending from the same crossing of the railroad of Broad Street.

Similar to Jug Tavern, the city was governed by a mayor, but now with six aldermen who had the power to issue bonds for public schools, water works and other purposes. The last Mayor of Jug Tavern and the first Mayor of Winder was H. S. Segars.

Considerable growth occurred in Winder during the 1890s. As the 20th century arrived, banks had been established as well as offices for attorneys, doctors, dentists, undertakers, real estate operations and blacksmiths. A drugstore came into existence and in 1900, the Winder Telephone Company opened.

Being situated in three counties caused continuous legal problems and governance confusion for the residents and businesses of Winder. It required almost 75 years, and followed many aborted efforts, for Barrow County to be established.Finally, on July 7, 1914, the Georgia General Assembly carved territory from Gwinnett, Jackson and Walton Counties to create the new county, Barrow, with Winder as the county seat. Each of these counties utilized a river as the line which would separate the donated land in the former counties from the future Barrow County. The new county was named for the Chancellor of the University of Georgia, David Crenshaw Barrow. A handsome new courthouse designed by James J. Baldwin was completed in 1920 at a cost of $133,400.00. The court house is now listed on the National Register of Historic Places. Other towns brought in with the establishment of Barrow County included Auburn, Bethlehem, Carl and Statham.

Winder continued to prosper during most of the first half of the 20th Century. Industries undertook the manufacture of overalls, hardware, textiles and the processing of cotton. Additional banks opened, and in 1907, the Winder News began publishing. After World War I, where Winder contributed many young men, major public investments were made including the paving of Broad Street, the creation of an electric light system and the construction of a waterworks. Highway 29 was paved from Lawrenceville to Winder in 1930, and during the following year, a nearby local resident, Richard B. Russell, Jr., was inaugurated as Governor of the State of Georgia. Later, upon his election to the U.S. Senate, Russell obtained an appropriation in 1943 to construct a local airport which opened in 1948.

Many important events helped to modernize Winder after World War II. Major public improvements led this modernization including the Winder-Barrow County Hospital with its groundbreaking ceremony taking place in August 1950. Construction began on the new federal building which opened in 1967--the same year that Fort Yargo become a Georgia State Park.

During the late 1970s, important investments were made in downtown including the restoration of the depot, improvements to downtown sidewalks and renovation of city hall, police and fire stations. Following a fire that destroyed two buildings at Broad and Candler streets, the city created a small park and parking lot on the site. Plans were drawn for a civic center and new police and fire facilities which were completed in 1986. A new headquarters for the Piedmont Regional Library was dedicated in 1988, and the new Barrow County Courthouse Annex opened in 1990. That year, Winder's population was 7,373 residents.

Each of the city's accomplishments were celebrated by the Citizens of Winder in 1993 with the commemoration of Winder's 100th Anniversary. A bronze marker was attached to the Winder City Hall by Mayor Buddy Outzs which reads: "To commemorate 100 years as the City of Winder, 1893-1993."