In an effort to help limit the spread of coronavirus (COVID-19), effective Tuesday, March 17, 2020, all city facilities will be closed to public walk-ins until further notice. City services will be available online, by phone, and through limited in-person appointments. Please review the full news release here.

Winder City Council passed an Emergency Declaration and Ordinance which is effective immediately and shall remain in effect until 11:59 PM on April 6, 2020. Please read the full document here.

Unsuccessful attempts to form a new county with Jug Tavern as the county seat were initiated as early as 1835, and again in 1855-1856. Efforts came to a halt for a number of years in 1877 when the newly adopted State Constitution specified that no new counties could be created for a quarter of a century. In 1904, several new counties were formed, and an effort was made to form a new county around Winder.

An unusual situation existed in Winder. The Counties of Jackson, Gwinnett and Walton came together in the center of Downtown Winder (the site is marked today, located at the Barrow County Court House). This three-county situation created a great deal of confusion as is illustrated in local legend:

Two local men became involved in a fight. One of the men, standing in Gwinnett County, shot another man who was standing in Jackson County. The unhappy victim of this affair fell and died in Walton County (Ingram, p. 16).

In 1905, an effort was made to form a new county centered in Winder called Stephens. This effort was not successful, but the people of Toccoa were successful in creating the new Stephens County in their area. In 1911, a bill to create Barrow County was introduced in the General Assembly. It passed the senate unanimously but was defeated in the house. In 1913, the bill passed the house but was defeated in the senate. In a reconsideration move, however, it passed 36 -34. The bill rested until the next session, and on July 7, 1914, Governor John M. Slaton signed the constitutional amendment creating Barrow County.

Barrow County was named for David Crenshaw Barrow, chancellor of the University of Georgia. 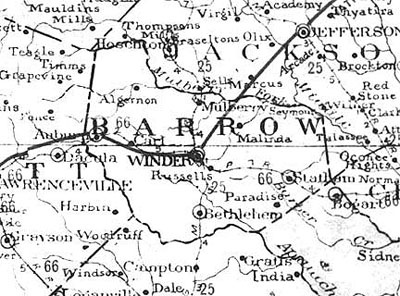